As per the marketing agreement with BP Singapore Pte Limited (BP), BP have purchased the crude FOB Wyndham and will deliver the crude to a refinery in SE Asia. Under the marketing contract, the price received will be the actual price BP have sold the crude to the refinery (being a fixed differential to the average dated Brent price for the month of April), less shipping and associated costs. Under these terms Buru Energy’s 50% revenue share from the lifting is currently estimated at approximately A$2.5 million, with the price to be finalised at the end of April.

Ungani Oilfield Production
Production from the Ungani Oilfield has continued to be impacted by wet weather with the Ungani access road being closed intermittently due to heavy rainfall. Late wet season rains have also resulted in the closure of the Great Northern Highway export route to all traffic on a number of occasions. This has resulted in a later than expected oil lifting, but the increase in the oil price from the previous liftings has been a compensating factor to the lower production volumes.

Production from the existing Ungani Oilfield wells is declining largely in line with field reservoir modelling, with continuous improvements being implemented to optimise field performance, including a recent upgrade of the produced water injection capacity.

Production from the Ungani 7H well continues to be below expectations with a recent workover to reconfigure the tubing in the well not resulting in the expected improvement in oil rate. A larger electric submersible pump (ESP) was subsequently installed in the well and this is expected to improve the overall oil rate from the well.

An ESP is also planned to be installed in the Ungani 5 well commencing 12 April. This will replace the current beam pump in the well and will increase the fluid production rate from the well. Acquisition of a larger ESP for installation in the Ungani 1ST1 or Ungani 2 well is also underway.

Consequently, with all wells on production in their current configuration, field production is currently in excess of 800 bopd. This is expected to stabilise and improve when the upcoming ESP installations are completed.

In order to maximise future production and oil recovery from the field, the Ungani Joint Venture has agreed to drill a further well on the field (Ungani 8) utilising the rig being mobilised to drill the Kurrajong 1 and Rafael 1 exploration wells. The Ungani 8 well is planned to be drilled as a horizontal well into the potentially undrained fault block originally targeted by the Ungani 6H well. Further details on the proposed well will be made available when the current well planning process is completed. 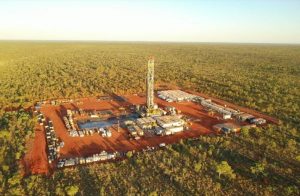