WA-focused mineral explorer Dreadnought Resources has outlined its plans for the next 12 months to RIU Sydney Resources Round-up, with major drilling programs anticipated across its three major projects. Dreadnought as nearly completed a drill program at its Illaara AU-CU-LCT-Iron Ore project, is about to commence an Auger Program at its Tarraji-Yampi  CU-Ag-Au-CO project near Derby and also plans drilling in May-June at Mangaroon, in the Gascoyne. 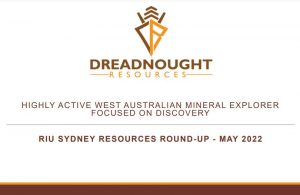