In addition to the flagship Mt Alexander high-grade nickel-copper sulphide project in the Goldfields, St George is preparing for a follow-up diamond drilling program at the Paterson Project in the East Pilbara.

Survey work at the Broadview Project in the Wheatbelt, near Chalice Mining’s Julimar discovery, is continuing while St George has announced a fourth project, Ajana, in the Mid West, where a recently completed airborne magnetic survey defined a very unusual, 20km long interpreted intrusion within the Northampton mineral field. 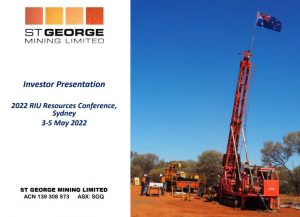