The reported Finniss lithium project Mineral Resource and Ore Reserve Estimate updates are the culmination of drilling and exploration efforts undertaken throughout the 2021 drilling season.

Core Lithium Non-Executive Chairman Greg English said,
“This is a tremendous outcome for Core and our shareholders and testament to the efforts of our operations and exploration teams as we focus on growing Finniss’ mine life and scale beyond last year’s DFS assumptions.

“The new Ore Reserve Estimate has resulted in a 12 year mine plan. In parallel, our teams will complete the 2022 drilling campaign to see if it can deliver equally impressive results across both our open pit and underground deposits.

“Most of the deposits at Finniss – including BP33, Carlton, Hang Gong, Ah Hoy and Sandras – remain open at depth and along strike and we are confident in the potential to deliver further significant increases to the Finniss resource and reserve position.

“Today’s positive announcement adds to the significant momentum being generated by the safe and timely development of Finniss Stage 1.

“Fully funded to first production, Finniss remains on track to ship first lithium by the end of this calendar year to herald Core’s arrival as Australia’s next lithium producer.”

Estimates for all existing Mineral Resources have been updated as well as the addition of a maiden Mineral Resource at Ah Hoy (Table 2). All Mineral Resources have been reported at a 0.5% Li2O cut-off, reflecting the current positive economics of the Project. The updated estimates for BP33, Carlton, Hang Gong and Lees include additional drilling and re-interpretation. The Sandras estimate represents a re-interpretation and classification of existing data while the estimates for Grants and Booths represent a rereporting of the existing models at the lower cut-off grade (Table 2). 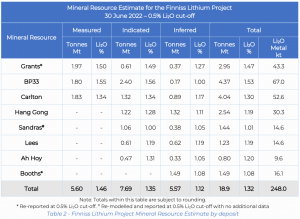 Construction and mining activities at the Project are ramping up with new equipment and people arriving on site. The Project is progressing well and is currently on track to make its first Direct Ship Ore (DSO) lithium shipment from the NT by the end of CY 2022, with first concentrate production commencing soon after. Further commentary on the new and updated Mineral Resource Estimates and Ore Reserve Estimate is provided in the full announcement.