Lykos kicks off hunt for nickel wolf in Bosnia

Germans go to the polls this weekend to elect the new government of Europe’s largest and most important economy.

Most pundits expects the left-of-centre SPD to emerge triumphant in coalition with the strongly represented Greens.

A wind of change in Germany is guaranteed alongside an even greater focus on climate change and cleaner energy, including the faster replacement of combustion engines by electric vehicles.

Just 1000km by road and rail south-east of the heartland of Germany’s vehicle manufacturing industry, a small Perth company hopes to unearth the next generation of high-quality nickel sulphides that are so sought-after by battery makers everywhere.

Lykos Metals, which this week opened its $12 million initial public offering ahead of an ASX listing as early as next month, is in the process of acquiring three highly prospective exploration projects in Bosnia and Herzegovina.

Among the projects is Sockovac, considered highly prospective for nickel, cobalt, copper, gold, silver and zinc.

Also in the news this week:

Lykos’ excitement stems from the fact that historic drilling and surface exploration at Sockovac in the 1960s and 1970s returned mineralised intercepts of up to 15 per cent nickel, 3 per cent copper and 10 per cent zinc.

An early target of the money that Lykos (ancient Greek for “wolf”) plans to raise in its IPO will be to twin-drill and in-fill drill at Sockovac, applying modern exploration techniques to try to confirm data from five decades ago.

The other two projects that Lykos is bringing to market – Sinjakovo (historical records indicate 27-120kt of copper ore was mined at grades of up to 25 per cent, with grades below 3 per cent discarded as waste) and Cajnice (prospective for copper, gold, lithium, rare earths, zinc and silver) – play into the thematic that Bosnia and its Balkans neighbours are hosts to significant, untapped polymetallic riches.

Stevanovic knows a bit about the Balkans and that section of the Tethyan Belt.

Prior to his role at Gold Fields, Stevanovic was heavily involved in the early technical work for Adriatic Metals’ (ASX: ADT) Vares silver project in Bosnia and before that part of the exploration team which discovered the 2.7 million ounce Timok gold deposit in Serbia.

“The European Union has identified the Balkans as an important supplier of the critical metals needed for the electrification of Europe’s economies and Lykos is positioned perfectly to contribute to this demand,” Stevanovic said.

“Bosnia and Herzegovina is a stable mining investment destination with foreign investors sharing the same rights as residents while enjoying strong government support.

“Lykos’ board and management team have a track record of recent success, key relationships in the Balkans and are backed by extensive technical, corporate, and legal experience.”

One of Lykos’ backers is executive director Milos Bosnjakovic, who will remain the company’s largest individual shareholder post-listing with about 35 per cent. Bosnjakovic is co-founder and a former director of Adriatic and remains on the board of Balkan Mining and Minerals (ASX: BMM).

ASX investors would be hard pressed to find a more experienced Bosnia hand.

Lykos, advised by leading corporate firm RFC Ambrian, is rattling the tin for up to $12 million through the issue of shares at 20¢ each. IPO investors will speak for 53 per cent of the listed Lykos.

Its prospectus targets an ASX listing by early November though heavy investor demand could pave the way for an earlier markets debut.

“I am delighted with the strong indicative support received in the lead-up to the IPO opening from investors who want to join us on what promises to be a journey of discovery and value creation,” Stevanovic said.

There is a dearth of genuinely exciting nickel exploration stories on the ASX, which is why Lykos is expected to also attract plenty of after-listing support.

Part of Lykos’ pitch is its location close to the European battery supply chain.

As investors are increasingly witnessing, Europe’s automotive and automotive parts industries are closely looking at opportunities to fortify its supply chain of key battery ingredients ranging from nickel and lithium to the rare earths of neodymium-praseodymium (NdPr) and dysprosium.

Highlighting this trend is the fact Hastings Technology Metals (ASX: HAS) has offtake deals in place with German blue-chip companies thyssenkrupp and Schaeffler for NdPr-heavy concentrate from its Yangibana operation while Northern Minerals (ASX: NTU), another Perth-based rare earths stock, has a deal with thyssenkrupp to supply dysprosium from Browns Range.

The Balkan region is fast developing a reputation as a mining-friendly province and is already home to serious operators ranging from Rio Tinto (ASX: RIO) – Jadar in Serbia – to Zijin Mining Group, which runs the Bor copper mine.

Lykos’ projects are within reach of Europe’s integrated transport network and close to other important infrastructure, and the company has flagged an aggressive post-listing exploration push that should generate steady newsflow. 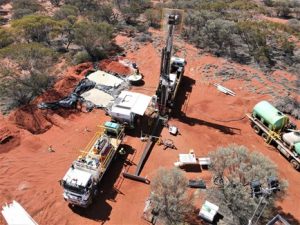