Complementing the company’s most advanced exploration project at Mt Alexander and its emerging Paterson Project, St George is excited about the next phase of work at the Broadview Project in the Wheatbelt and the identification of a major intrusion at its newest project – Ajana in the Mid West.

The addition of Ajana, generated by St George’s experienced in-house team, increases the pipeline of quality exploration assets to four highly prospective battery minerals opportunities – at varying stages of advancement – that will be progressed systematically.

The exploration push is underway across all four projects:

“Our advanced Mt Alexander Project has been – and will continue to be – a significant value driver for St George as our systematic exploration of the project area focuses on the discovery of more Ni-Cu-PGE mineralisation near surface and, increasingly, at depth,” executive chairman John Prineas said.

“The exploration success at Mt Alexander has also given us the confidence to find similarly exciting and complementary projects across the Tier 1 jurisdiction of Western Australia so that we can build a pipeline of quality greenfields opportunities aligned with our battery minerals strategy.

“I am delighted with the work performed by St George’s technical team to build this four-project pipeline and to immediately identify multiple new targets that show exceptional potential for new discoveries. We have a clear path to commence high-impact drilling across all four projects.

“With important survey works and diamond drilling about to start as part of this step-up in exploration activities, St George is preparing for a period of busy and exciting newsflow at a time when investors are rewarding discovery success in the battery minerals space.

“The company looks forward to reporting back to our shareholders on the progress made.” 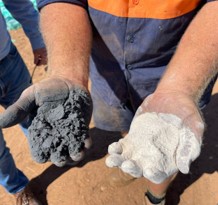