It’s been a truckin’ journey – Hyzon Motors off to $2.8b NASDAQ debut

From its humble beginnings as a quiet achiever within Singaporean parent company Horizon Fuel Cell to establishing itself as a standalone supplier of hydrogen-powered fuel cells to the commercial transport sector, a near 20-year journey for Aussie Craig Knight and his global team culminated this week when Hyzon Motors successfully listed on the NASDAQ with a $2.8 billion market capitalisation.

Following the completion of its merger with cashed-up special purpose acquisition company (SPAC) Decarbonization Plus Acquisition Corporation (DCRB), Hyzon’s team tuned in live from around the world on Monday morning (US time) as the DCRB ticker code made the switch to HYZN on billboards over Times Square in New York when the US markets opened for trade.

“This exciting step marks the starting line for Hyzon Motors,” Mr Knight, who leads Hyzon as its CEO, said on listing day.

“Our public listing will foster greater awareness that the future of commercial transportation – hydrogen fuel cell-powered vehicles – is today’s reality.

“It’s the beginning of a new chapter in the history of Hyzon as we accelerate the transition to hydrogen commercial transport worldwide and advance our commitment to reducing carbon emissions in a sector that is one of the largest contributors to climate change.”

Hyzon, this New York-based company with proud Australian roots, announced in February that it would seek to list on the NASDAQ via a merger with DCRB in a deal that would generate gross proceeds of US$626 million including a US$400 million private investment in public equity (PIPE) funding at US$10 a share. 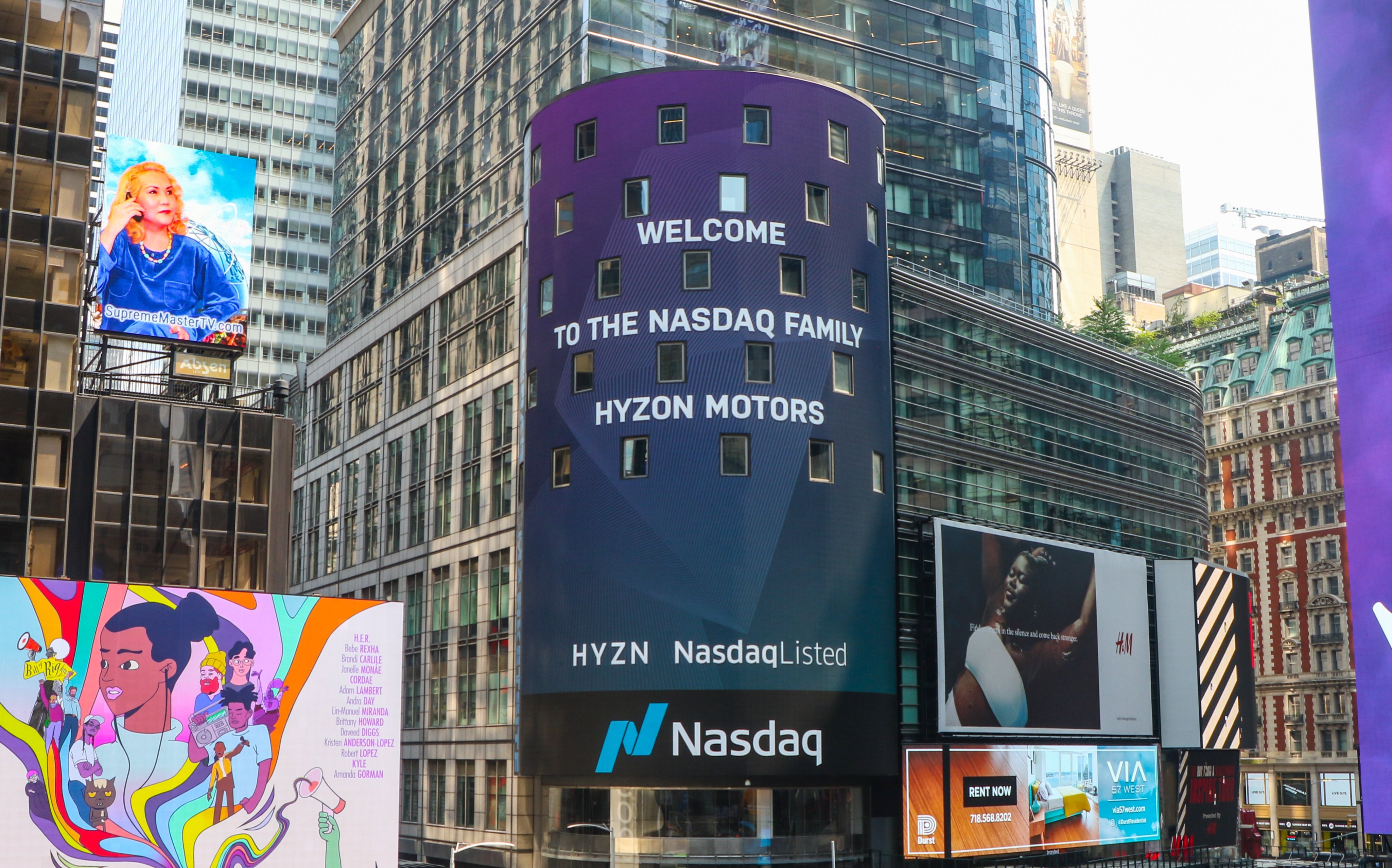 With operations in the US, the Netherlands, Singapore, Australia and China, Hyzon is focused on hydrogen in the commercial vehicle market. With its hydrogen fuel cell technology at the centre of the offering, Hyzon aims to supply zero-emission heavy duty trucks and buses to customers all over the globe.

Hyzon was quietly working in the background of parent company Horizon for about 17 years until early 2020, when it was established as a standalone business led by Mr Knight and his colleagues and founding Hyzon team members with the ambition of bringing its decarbonisation strategy to the global stage.

In the lead-up to its listing, Hyzon inked deals with several Australian heavy hitters including:

It is also currently working on a prototype “SuperBus” in collaboration with Perth-based industrial technology company WarpForge while in New Zealand it has linked arms with Hiringa Energy under an agreement that will see Hyzon deliver 1,500 hydrogen fuel cell-powered trucks to the Kiwi nation by 2026 and utilise Hiringa’s planned hydrogen refuelling infrastructure.

Cannings Purple has been providing strategic communications advice to Hyzon Motors since 2020 and congratulates the company on its successful NASDAQ listing.

Communicating your story to all stakeholders, including shareholders and prospective investors, is key. To discuss your strategic communications needs, contact Cannings Purple’s Director of Investor Relations Peter Klinger.

What market turbulence? Gold Road gets its prize, others kick goals